Wait a second... The Rangers are in first place? 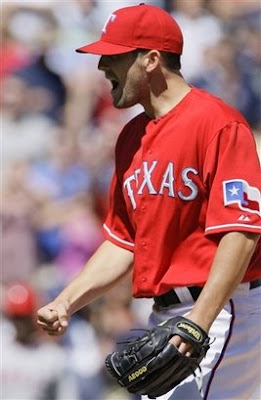 I can't be the only person who didn't know this.
I follow baseball pretty damn closely. I wrote a 24 page post about the history of Diamondbacks. So you would think I would have known that.
But there they are...
I thought the Angels were going to take a step back in my fearless predictions and I felt a team was going to take advantage of the Angels stumble.
I thought it was going to be the A's.
The A's have been horrific.
And somehow the Rangers are on top.
And someone named Scott Feldman is pitching them to victory!
Hands up if you thought the Rangers were going to be good.
Yeah I know it is early, but Memorial Day Weekend is coming up... the unofficial 1/4 way mark of the season.
It's not THAT early. And a sweep of the Angels means a nice little tie breaker.
Now the question is do Rangers fans know?