An Early Birthday Present for Sully... a trip to the ballpark 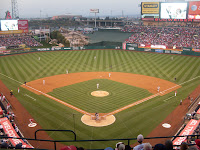 I went to the Sox/Angels game,  my first ball game of the year... and as a resident of Los Angeles County, I can tell you that the Angels have no business calling themselves Los Angeles!

But I saw my Red Sox drop an 8-4 game to the Angels. I successfully missed seeing all four of the Red Sox runs but managed to see the Angels pound Tim Wakefield.

Well, he was our ace for a while... you live by him and you die by him.
One day he'll nearly throw a no hitter... the next he can't hold a 4-0 lead.
Besides, the Angels pitcher Matt Palmer settled down and did the unthinkable:
He threw a complete game.
WHAT A MIRACLE! A pitcher settled down and completed a game. Better send a copy of that game to Cooperstown!
It was cool to see Daniel Bard's big league debut. He threw gas, and if this is a sign of things to come, our bullpen might have another home grown flame thrower in the mix.
Either way, although it was a loss, 8-4 losses are easier to handle. It wasn't our night.
But it was the night before your pal Sully's birthday. (Today I turn 37.)
And I got to see it with my pal Kenny Mack, the writer for the Santa Monica Daily Press and a classmate of mine at the Woodland School in Weston Massachusetts when we were 10.
Back then we were a pair of goof balls talking about the Red Sox.
Good to see we grew up! 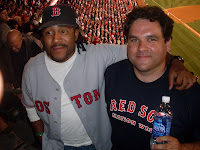