Happy Birthday to my best friend in all things baseball! 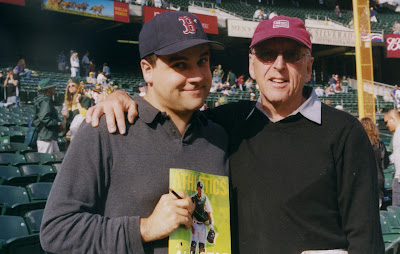 There's one person I have watched more baseball games with than anyone else.

There's one person I have talked about baseball with more times than anyone else.

There's one person I always know is willing to talk about baseball at any time, including during Christmas time.

When a big trade happens, he's the first person I call.

When a great catch is made or a big home run in the playoffs is hit, I need to know his take.

In college we went on baseball trips together where we would see 3 or 4 different stadiums in a weekend.

We jumped off the couch together when Hendu hit his homer.

We poured over the box scores together

When the insane baseball coverage in 1995 prevented him from seeing the extra innings Red Sox/Indians Game 1 of the Division Series, I gave him the play by play over the phone.

Two days before my wedding (in the picture above) we went to Oakland to see Game 2 of the Division Series between the A's and Red Sox.

Over the years we've seen games together in 17 stadiums.

Oakland Collesium (before and after the renovation)

And that isn't even counting minor league games in New Haven, New Britain and San Jose.

He's my best friend in all baseball matters.

He also happens to be my dad, but that's just a coincidence.

Happy Birthday dad. One of these days we'll be adding to that list of stadiums, and bringing two new baseball fans with us. 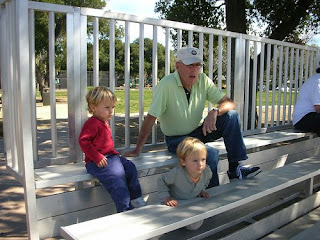