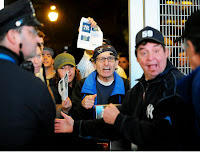 So the Yankees had fans who paid hundreds of dollars for the cheap seats couldn't get back into the stadium after officials told them the game was called?
Security at the new Stadium couldn't come up with a system that would allow someone who was already in the park to come back?
Really?
Here's a suggestion from your pal Sully to keep another humiliating episode.
It's called a hand stamp.