Clean Slate In The Bronx 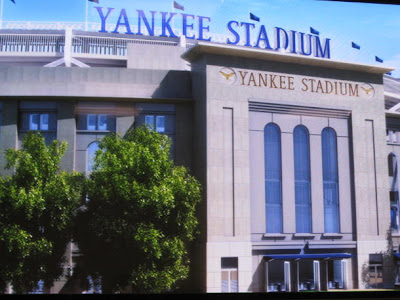 I suppose this is a big night in the historic rivalry of the Red Sox and the Yankees.
It doesn't feel like it. It feels like a welcome respite after another lousy series in Tampa.
But here we are... the Red Sox... the team with the most titles in the 21st Century... is entering the House that George Got Financed.
The old park echoed with the ghosts of Championships past.
The new park echoes because of the empty seats.
The old park sent a shiver down the spine because of the events from 1923 to the Boone homer coming to vivid memory.
The new park sends a shiver down the spine because of that damn wind!
The old park was hallowed ground where Ruth, Gehrig, DiMaggio, Berra, Mantle, Ford, Howard, Maris, Munson, Jackson, Jeter, Rivera and yes even Roger Clemens had their glory.
The new park has Mark Teixeria and CC Sabathia apologizing for their paycheck.
There is literally a clean slate for the Red Sox in this ballpark.
It feels odd that I am going to see a Red Sox/Yankee game that doesn't conjure up memories. Not the agony of everything pre 2004 nor the euphoria of 2004.
Nothing... just a big new ballpark.
Good seats are still available.