Managers who should not feel too comfortable in their job

A few weeks ago I was going to write a blog post about which managers I thought were in trouble of getting the axe... but I thought it was too soon.

Then the Diamondbacks fired the 2007 Manager of the Year Bob Melvin in order to bring up A. J. Hinch to the helm after managing zero games at any level.

While that hiring might seem odd, the timing didn't. The Diamondbacks are loaded with young talent but got off to a .414 start.

And with Manny out for a while, the D'Backs felt that now was the time to make a change.

The D'Backs are now 2-6 under Hinch and have sunk 10 games back in the loss column to L.A. I'm sure they were hoping for a little better bump in the standings than that.

There was a sense of abject panic in New York (as I wrote, part of it from a collective amnesia). But the recent 6 game winning streak has brought not only a little joy in the Yankee clubhouse (and made A-Rod suddenly the most popular Yankee without a worry in the world) but also took the heat off of Joe Girardi (at least until the next losing streak.)

And last night's 5 error fiasco not withstanding, the Mets have climbed back into the race and Jerry Manuel's job seems safe (at least until June.)

So whose head will roll next?

The staff at Sully Baseball has some thoughts on the matter. 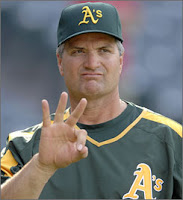 The A's did extend his contract this spring as a vote of confidence. Billy Beane actually went out and acquired players like Holliday, Giambi and Cabrera and the Angels stumbled out of the gate with injuries and tragedy.

And your pal Sully drank the Kool Aid like nobody's business!

And how did the A's respond? By playing .371 baseball. They are on pace to lose 100 games and have been blown out of the water in this recent road trip.

I can't imagine the A's front office is too happy. And after years of being a perrenial contender no matter the budget, Geren finished sub .500 in each of the last two years and seems to be running the team into the ground.

Frankly, I can't believe he still has a job. Nothing against Harry Ralston Black, who I am sure is an astute baseball man.

But how someone can take a team that always seems to contend, have them miss the playoffs his first year, become a 99 loss team the next and seem destined to have another losing season this year and not be checking Craigslist for a new gig?

The Padres got off to a surprising start and were 6 games over .500 on April 18. They are 7-19 since, and that's including the three game sweep of the Reds this weekend.

They are a losing streak away from a fire sale. And Black should call his old buddy Mike Scioscia to see if his old pitching coach job is available. 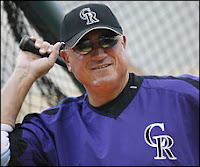 I know, I know... how can Clint Hurdle be in trouble? He led the Rockies to their lone World Series appearance!

Let's take a close look at his managerial career.

Yes, the Rockies went on their amazing run starting midway through September of 2007 and rode it all the way to the National League pennant.

But let's look a little closer at his managerial record, shall we?

So in 7 plus seasons, he has delivered 6 lackluster losing seasons and a 530-619 record.

It might be time to realize that two week run and pennant drive was a fluke. 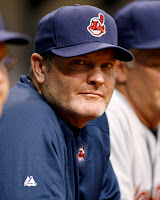 So why not give the 2007 AL Manager of the Year the Robespierre treatment?

After winning 96 games in 2007 and being one jaw droppingly stupid third base coach decision away from tying Game 7 of the ALCS in the 7th inning, the Indians were supposed to be a World Series contender in 2008.

Instead they scrambled to .500. This year they were supposed to be contenders, only now they can't seem to get out of their own way.

They've had no winning streak longer than 2 and can not put away series.

Perhaps Wedge can take heart that the Cavaliers run to the NBA Finals will take a little heat off of the Indians (and the Browns for that matter) in terms of delivering a title to Cleveland. But this talented group might need some new direction... or start the fire sale.

Now mind you I am not saying Ozzie should be fired. I am a confirmed Ozzie Guillen fan. We need more managers who are actually, you know... fun!

And I think his winning the 2005 World Series so convincingly without a Hall of Famer in his lineup (Frank Thomas was hurt) and without an MVP nor Cy Young winner on the roster is one of the great managing jobs of the last few decades.

Plus he has delivered 4 winning teams in his first 5 seasons plus another trip to the playoffs last year. He has changed the culture in the South Side and turned the White Sox from an after thought to the team that can actually WIN in Chicago.

So why is he in trouble?

Well, there are opera singers who would call him a diva. Plus he threatens to quit every 10 minutes. His crazy act looks inspired when the team is winning, but when they are losing I am sure it gets tiring.

And the Sox are in the middle of a 5 game slide right now and letting a winnable AL Central slip away. One of these days Ozzie might go into Kenny Williams' office and say "I quit!"

Earlier this year, I made fun of the notion of Acta being fired, as if this train wreck of a team was his fault.

Now I am not so sure.

And this team looks like it could be one of those spectacularly bad teams.

It's not just they are in their second five game slide of the season and have had three other 3 game skids.

But they just play a horrific brand of baseball. Their bullpen blows games... their bats go dead... they make bonehead plays in the field... and evidently they aren't even taking infield before the game.

Yeah because when you need to have a big finish to win 60 games, you've earned the right to kick your feet up.

Now if the plan is to get the #1 pick over all in back to back seasons, then hang up the Mission Accomplished banner!

But if the Nationals want to start filling those empty red seats in their beautiful new ballpark, maybe a sacrificial lamb is in order.


Now will ALL SIX of these guys be out of a job?
Probably not, but no doubt there will be a job vacancy this year. And as last year's bizarre firing of Ned Yost showed it is never too late to fire a manager.

All I can say is this to the teams thinking about a managerial change... would it KILL you to interview Chris Chambliss????