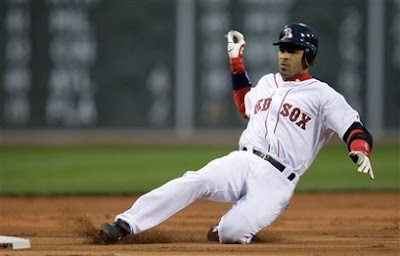 Has anyone else noticed that Julio Lugo has played really really well since coming off of the DL?
Is that a sign of the apocalypse?
I mean isn't it a fact that Lugo is one of Theo Epstein's rare missteps?
Wasn't his 4 year $36 million contract worthy of constant head shaking?
Didn't we all give a sigh of relief when Lugo got hurt last year and Jed Lowrie started playing full time?

He had a 5 hit game the other day and made a few nice defensive plays?

He seems to be on base when homers are hit?

How strange is this? When I saw Gil Velasquez in the game last night, I thought "Oh no! What happened to Lugo???"

If this works out and Lugo winds up having a terrific season, I will believe that Theo is incapable of error.