A big gulping sound from Cleveland 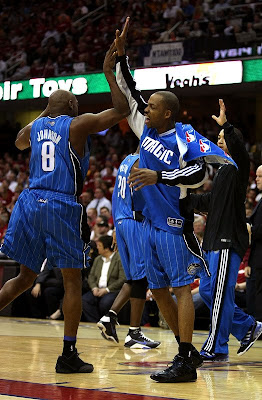 When I saw the Cavs had a big halftime lead yesterday, I wrote down a note to do a blog post for Cleveland fans...
I was going to urge Cleveland fans to clear their schedule between June 4th and June 18th.
I was going to say this will be a coronation of King LeBron and a liberation of Cleveland sports fans from an oppression felt since 1964.
I was prepared to say even J. R. R. Tolkien would say "That's quite a long way to go for one ring!"
Then a funny thing happened. In a commercial break for American Idol... I clicked on my computer and saw the Magic came back and won.
My my my.
Not to get all Kill Bill on Cleveland fans, but you didn't think it was going to be that easy did you?
Yeah, me too. For a second there I kind of did.
Well, now they have a series and have to take home court away from the Magic.
Other wise you'd have to ad another clip to that growing post 1964 Cleveland sports montage.
And we don't want that, do we?
Posted by Sully at 11:04 AM