How can a game end on a bases loaded walk? 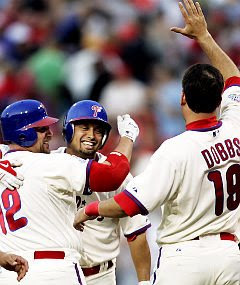 I'm dead serious with that question.
It happened twice this weekend and I find it personally baffling that it can happen at all in a Major League Game.
Sean Green of the Mets walked Shane Victorino with two outs and the bases loaded in the bottom of the 10th on Saturday.
And of course there is NO WAY a loss like that to the Phillies of all time could EVER come back to haunt the Mets, is there?
And the previous night, a marvelous pitchers duel in Los Angeles was marred because San Diego reliever Duaner Sanchez (a former Met) walked Russell Martin with the sacks packed and two outs in the bottom of the ninth.
How can this happen?
Seriously?
When Kenny Rogers ended the amazing 1999 NLCS between the Mets and the Braves with a bases loaded walk, I had that same empty feeling as I had when the Blair Witch Project just kind of sort of ended.

"All that suspense and THAT'S how it ends?"
The bases loaded walk to end the game should never happen about AA ball. You are basically giving the team the win.
If you are a major league pitchers, and I assume Green and Sanchez are, then chuck it down the middle!
The worst thing that happens is a walk off grand slam.
At least that puts the onus on the HITTER.
The hitter could be late or early in their swing. They could pop it up, line it right at someone... the center fielder could do an acrobatic catch or pull and Endy Chavez and pull the homer back.
If I knew that a pitch out of the strike zone could me "automatic loss" then I am not thinking "I'm going to hit the corner" or "I am going to fool him with a hook."
Hell, announce it. "I AM CHUCKING THIS DOWN THE HEART OF THE PLATE!"
Change speeds. Do SOMETHING!
Just don't hand them the win.
At least hit the guy!