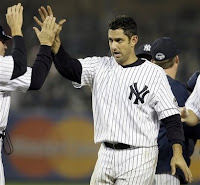 Let's say at the beginning of the year I told you this:

You would be starting the season WITHOUT Alex Rodriguez.

He replacement, Cody Ranson, would play like a career minor leaguer.

The pitching staff would let up several embarrassing blowouts, including the 9-1 Stadium opening debacle and a 22-4 drubbing on National TV.

The Yankees would be swept by the Red Sox, including a game where Mariano Rivera coughed up the lead in the ninth and another game where an early 6-0 lead turned into a 16-11 loss.

The Red Sox would win 12 of 13, including the three from the Yankees.

Wang would be so bad his first three starts that they had to pretend he was hurt.

Big free agent pick up Mark Teixera would be hitting .189.

Literally big free agent pick up CC Sabathia would have a losing record and a 4.73 ERA.

Other free agent pick up A. J. Burnett would also look like a money pit with a 5.40 ERA.

The middle relief of Jonathan Albaladejo, Jose Veras and Damaso Marte would be so bad that the "Joba to the pen" debate would be reignited.

There would be empty seats... LOTS of them... at the new Yankee Stadium.

Now I told you all of that...
And then I told you on May 2, the Yankees would be 1 game back of the Red Sox and 2 games out of first place... I have a feeling you would ALL take it.

This is why I picked the Yankees to win the Division.

It pains me to say it. I hate giving the Yankees credit... but they actually weathered this storm well.

Thanks for the help, Brian Fuentes!