I just thought of another way to humiliate Alex Rodriguez 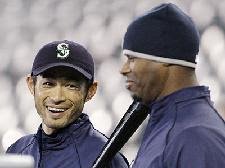 Thinking of ways to humiliate Alex Rodriguez IS the national past time, isn't it?

I thought of another scenario that could be rubbed in A-Rod's face.

The Angels are falling apart with a dismantled pitching staff and a lineup that doesn't inspire confidence.

The A's are not taking off the way I thought they would and the Rangers are destined to be an all hit no pitch mess.

And the Mariners could sneak in and win a very winnable division.

And how cool would that be for Seattle fans if they got their underrated misery was quenched with a World Series title featuring BOTH Ichiro and Junior.

It could get even cooler if the Mariners trade for Randy Johnson.

Why didn't anyone think of that? They are already doing a Junior good bye tour... why couldn't the Mariners also have brought back the unit to win #300 in Seattle instead of with the Giants.

But either way, Ichiro and Junior leading Seattle to the promised land would be poetic for the Mariners franchise... and yet because I am somewhat sadistic think it would also reflect on A-Rod who couldn't lead the Mariners anywhere.

I'm not proud that I think that way. I also don't think I am alone.