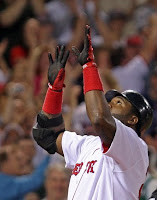 The drought is over for Big Papi.
He now has more home runs this season than Stephen Hawking.
Hopefully that will mean he will be relaxed and quit thinking the weight of all New England is on his shoulders.
I stand by my previous Papi statements.
Not to take away from the euphoria of Papi's blast to centerfield, but I was convinced that Cito Gaston was going to leave poor Brett Cecil in that 5th inning until he gave up a homer to all 9 Red Sox hitters!
But I won't take away from the significance of these two games against the Blue Jays.
The Jays came in to Fenway on a 4 game winning streak and holding onto first place. They were shut down by two terrific starting pitching performances by Wakefield and Penny and the Sox bats got the hits they needed.
Now the Sox have a 7-0 record against the Yankees and Blue Jays and are doing it with pitching!
Show no mercy. Go for the sweep.
And maybe have Papi double his home run total.
Posted by Sully at 6:52 AM