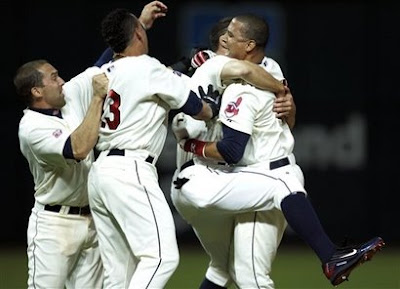 There were 20,929 tickets sold for yesterday's Cleveland/Tampa Bay game.

The number of people who saw the mindboggling ending where the Indians came all the way back from an early 10-0 hole with a wild 7 run bottom of the 9th inning was a lot smaller than 20,929.
The staff at Sully Baseball salutes two specific fans among the 20.929.
1. THE GUY WHO WAS PRESSURED TO LEAVE
Inevitably there was a big time Indians fan there with his friends. This guy loved Andre Thornton, Joe Carter and thought Greg Swindell was going to be a left handed Roger Clemens.
This guy is still bitter about Jose Mesa's 9th, Tony Fernandez's error and Joel Skinner not waving home Kenny Lofton.
And this guy was at the game with his friends who wanted to split when the game was 10-0.
This guy didn't want to leave. He knows the Indians came back from a 12-0 lead on August 5th, 2001! They scored 4 in the 8th and 5 in the 9th and 1 in the 11th!
But his friends wanted to go. His friends wanted to go to some cook out or some kegger.
And by the 8th inning when it was still 10-2, he gave in.
But as he was leaving, pressured into abandoning his seat, he looked back at the field, knowing he was doing the wrong thing.
I hope he gave his friends more grief than Job ever got on the ride home.
"YOU DIDN'T LISTEN TO ME! WE WATCHED THE LOUSY 10-0 PART OF THE GAME!"
I feel your pain, brother.
I hope your friends bought all of your drinks.
2. THE GUY OR GAL WHO CONVINCED THEIR FRIENDS TO STAY
Inevitably there was someone who persuaded their friends to stick around.
I bet they said "It ain't over til it's over."
I bet they said "Stranger things have happened!"
And I bet they capped it off by saying "I bet you thought the Cavs/Magic game was over before LeBron took his shot!"
And when Victor Martinez hit that liner up the middle, I hope that person thumped their chest like Greystoke!
I hope they screamed "I TOLD YOU!!! I TOLD YOU!!!"

Baseball is the greatest team sport there is... and I submit yesterday's Cleveland/Tampa Bay game as proof.


No clock to run out. No taking a knee. You need to get that 27th out.

These highlights give me goose bumps, and I don't like either team!