A few facts about David Ortiz 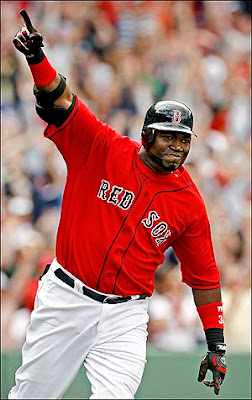 I am going to list a few facts about David Ortiz.
- He came up to the Major Leagues in 1997.
- Between 1997 and 2002 he was an adequate yet oft injured part time DH/1B for the Minnesota Twins.
- In 2002, his sixth season, a 26 year old David Ortiz set a new career high with 20 homers as the Twins made the ALCS.
- After the 2002 season, the Twins declined to offer him a contract.
- He signed with Boston in 2003 and struggled at the plate, batting .208 with 1 homer and an OPS of .657 on May 13.
- Suddenly, the oft injured and struggling hitter exploded with numbers that dwarfed his best seasons in Minnesota.
His previous career high in home runs was 20.
He hit 31 in 2003.
His previous career high in RBI was 75.
He drove in 101 in 2003.
His previous high in OPS was .839.
His OPS in 2003 was .961.
And he reached all of those new highs in only 3 more games than his previous season.
- He exploded into one of the most dominating offensive forces over the next four seasons.
- His physique was terrifying.
- The era was best described by Alex Rodriguez as "Loosey Goosey."
- Steroid use can lead to heart issues.
- Ortiz developed heart problems in 2006.
- His injuries increased and his bat speed decreased when testing became more frequent in the wake of the Mitchell Report.
- In 2009 he has as many home runs as Dr. Maya Angelou.
- He was great friends with Manny Ramirez.
- Manny Ramirez is serving a suspension for testing positive for a banned substance that is commonly used to help people coming off of a steroid cycle.
- Ortiz has made several strange "hedge your bet" statements about steroid use, including yesterday when he said:
“It’s a little confusing, because there are guys out there taking things that sometimes you can buy it over the counter, and sometimes it’s banned and not on the list, I don’t know,” said Ortiz. “I don’t really know, but like I say, you definitely have to be careful.”
All I've done is list some facts.
I am not accusing anyone of anything.
I love David Ortiz and the wonderful memories he has given all of us Red Sox fans.
Just have your guard up.
Posted by Sully at 12:48 PM