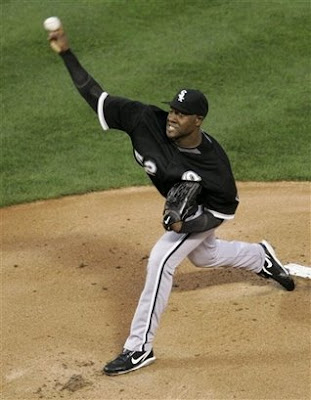 And I did mention him a few posts ago...
It's over.
He's done.
The White Sox need to just part ways with him if they want to repeat as Division Champs.
It's not a slow start. This isn't CC Sabathia.
He was wretched the second half of 2006... all of 2007... was nothing special in 2008 before he got hurt... and now he is an automatic loss.
That's more than 2 1/2 seasons of suckage.
And who knows how old he really is. There are young players in the White Sox farm system who can take his spot... but they have to do this now.
Do it now before he starts to wipe away the memory of his amazing 2005 season.
He should always be loved, if for no other reason than being the pitcher who clinched the 2005 pennant with a complete game and because the first Chicago pitcher (for either team) to get his team into the playoffs since 1959.
All good memories for the team... time not to spoil them.
(Maybe they can deal him back to the Yankees!) 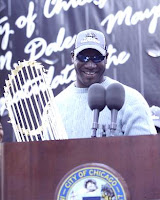