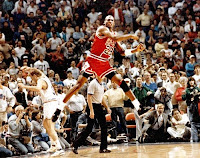 I was watching the last few minutes of the Cavs/Magic game with my father in law tonight. I explained to him why when in doubt, I always root for a Cleveland team.
I'd get into it again, but it is best explained in my Cleveland Rocked City post from last year.
When Hedo Turkoglu (I think I spelled that correctly) his the shot with one second left, I strangely felt deflated.
I had been there before. That moment where you think "I thought this year was going to be different."
I had that when the Red Sox lost in the post season in 1988, 1990, 1995, 1998 and 1999. None of those teams got to the brink of 1986 nor 2003... their disappointment came not from how close they got but with how they whimpered out.
It was the "Oh no" feeling that my Cubs fan boss Frank had when Loney hit the grand slam last October.
And the TNT cameras cruely went around the arena, getting shots of the thousand yard stares from Cleveland fans of all ages.
There were some middle aged fans who were clearly thinking "I can't believe THIS team is going to putter out."
There was a kid who had an expression on his face as if to say "Wait a minute? Am I really going to grow up as miserable about my sports teams as my dad?"
There was an older guy who you could see his brain working. "Cavs are toast, the Indians are the worst team in the AL, the Browns stink... oh man this isn't getting any easier."
And I said to my father in law "There is no way the Cavs can win it now."
And my father in law in his infinite wisdom said "Oh it's possible."
I shook my head and said "This city needs a hug."
Then LeBron hugged them.
It's amazing to watch a sporting event live that when it happens, you know it will be shown on highlights reels from this day forward.
And of course the comparison will come to Jordan's shot over Ehlo... only this time Cleveland is happy.
In some ways the Jordan shot will always be bigger. It ended a series and it signaled the beginning of Jordan's playoff supremacy.
But if the Cavaliers win the NBA title this year, James' shot my wind up being bigger.
It was a Conference Finals game, not a first round match up like Jordan's.
And Jordan's Bulls didn't win the title THAT year. (They did 6 of the next 8 seasons... but still.)
If this is the turning point... the Gibson homer... the Messier Game 6 against the Devils... the Dave Roberts steal... the LT recovering Roger Craig's fumble... that leads to a dramatic championship... then it will be bigger.
What I am saying is Cleveland fans should be clearing their schedules for any Cavs game.
Evidently all they need is one second to do something amazing.
(Why didn't Van Gundy quadruple team LeBron?)
Posted by Sully at 11:04 PM