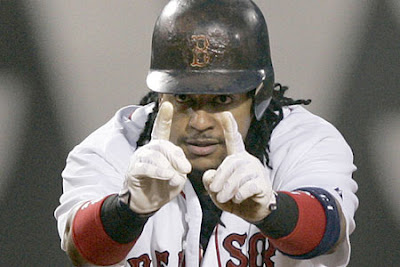 I was in a meeting this morning when the announcement of Manny Ramirez being on the juice came out. When I came back to my desk and opened my e mails, you would have thought there was a death in my family.
So let's not dance around it anymore... let's talk Manny.

In honor of my reader, Chris...
I will show him only in a Red Sox uniform
Chris wrote "You should put him in a Red Sox uniform. That's how I like to remember him" in my comments section.
I suppose to imply that showing him in a Dodgers uni would imply he was clean in Boston.
I have no idea if he was or not... but chances are he wasn't and I am not going to cower away from that. 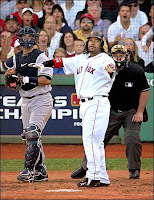 Is this REALLY stunning?
Some people wrote, acting stunned that Manny had tested positive for a banned substance.
Honestly can any of this be stunning anymore?
Exactly how many sluggers from the 1990s and 2000s who put up Hall of Fame numbers have to test positive before you stop getting surprised?
Haven't you seen a pattern developing here?
I think from this point forward, there can be no shock... except Julio Lugo. 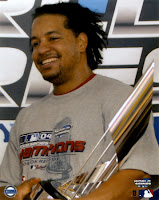 This negates the Red Sox World Championships!
I've read that sentiments from some people. Most of them are called Yankee fans who missed chanting 19-18.
Nonsense.
As I said before, the entire era was filled with so many users of P.E.D.s that we will never know for sure who was clean or not.
It's time to just say the era itself wasn't clean and use the adjustment for numbers I proposed earlier.
Besides, the Yankees won World Series with Chuck Knoblauch, Andy Pettitte and Roger Clemens.
Didn't Luis Gonzalez look a little pumped up in 2001?
How about Troy Glaus in 2002?
Pudge Rodriguez in 2003?
And Tony LaRussa's Cardinals in 2006... it's only a matter of time.
Should we wipe ALL of those out?
Please. 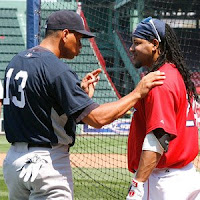 My fellow Red Sox fans had better not get holier than thou about A-Rod and using P.E.D.s
Both teams used them.
Both have players who weren't honest about it.
The difference is whatever Manny did still worked in October.

Hey! It was a prescription drug!
Scott Boros told us this was a misunderstanding involving a prescription, so that should be enough of an explanation.

And Barry Bonds thought he was rubbing flax oil on his knee and Alex Rodriguez didn't know what his cousin was injecting into his butt.

Alireza, one of my loyal readers, wrote me " Your opinion on steroid use is a valid one and you are entitled to it, but there isn't any evidence that Manny did anything other than take a legally prescribed medication that was banned by the drug policy."

Of COURSE! He took a drug that increases testosterone levels for people who are have trouble producing more.

And what causes a drop in testosterone levels?
Hmmmmmm. I wonder.
Is that enough to convict him of a crime?
No. But when a guy is taking a drug that is used to combat one of the main side effects of an illegal drug, and he has the physique of a juicer, came up during the height of the steroid era and, oh yeah, is serving a suspension for using a banned substance... I think I can be suspicious.
Or maybe he's just trying to have a baby.

How did he get caught?
Seriously!!!
When you know people are testing now, how can you let yourself be caught on a test?
The only thing I could think of was he left so many urine samples in the Green Monster that they probably analyzed it. 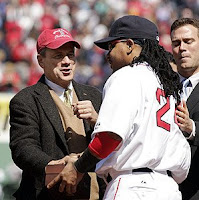 How lucky are the Red Sox that THEY aren't dealing with this now!!!!
I just now have complete and utter faith in EVERYTHING Theo Epstein does!
It's like he knew exactly when to deal Manny away.
The Dodgers deal with this while Jason Bay has become the Yankee killer.
That's worked out pretty well for the Sox! 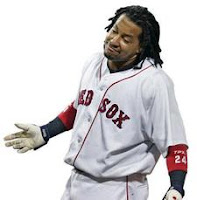 Speaking of the Dodgers... this makes the NL West a little more interesting

Suddenly the team that was running away with the NL West has a giant hole in the line up.

So giant that they might soon resemble the Giants!

I don't 100% understand how VORP (Value Over Replacement Player) works, but I know that when you take Manny Ramirez out of the line up and insert Juan Pierre, you've taken a step down!
And it goes beyond stats. Players like James Loney and Andre Ethier have done well with Manny taking all of the pressure off of them.
Now they have to carry a lineup in a pennant race in a tense clubhouse.
This isn't trial by fire. This is trial by HELL! 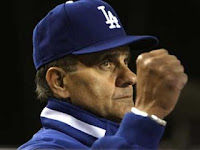 Time for Joe Torre to earn his money
Joe Torre woke up this morning, feeling badly for his friend Joe Girardi. All that turmoil in New York must have seemed like a world away.
He probably looked over to his wife Ali and thought "Thank Heaven all I have to worry about in L.A. is winning the easiest division in baseball."
Then the phone rang.
If he can keep THIS team focused and win, then he should have silenced whatever critics he had left. He isn't an X's and O's manager. He handles crises.
Guess what? The barn is on fire.
Torre must be so nostalgic for yesterday!

Jose Canseco is ALWAYS right
Canseco said it was 90% in favor that Manny Ramirez was on something?
People laughed it off?
Folks, how many times does Canseco have to be right on this subject before people start realizing he ISN'T a laughing stock?
Cassandra must look at Canseco and think "I know what you are going through, pal!"

So you must hate Manny
Nope.
Manny gave me so many moments of joy as a Red Sox fan, so many happy memories in the regular season and the World Series that I can never hate him.
And everyone hates their own juicer.
San Franciscans still cheer Bonds.
New Yorkers still cheer Pettitte.
And as I said in my Homegrown vs. Acquired post for the Cardinals, I equating celebrating Mark McGwire with thinking about an old girlfriend of mine who dumped me. Once the hurt of the dumping subsided, I have nice memories of our time together.
That's how Red Sox fans should look at the Manny years. Lots of good memories.
Lots of silly memories.
Lots of clutch hits.
I'll never boo him. He was too much fun.
And remember, this game is supposed to be fun!
Posted by Sully at 4:00 PM