1972 and 1990 were big years in the life of your pal Sully.
On May 14, 1972, the same day Willie Mays hit a home run to defeat the Giants in his first game as a Met, I was born in Willimantic, CT.
And in June of 1990, I graduated from high school in Atherton, CA and went off to NYU.
I predict there is going to be a very 1972 and 1990 feel to this year.
As I said in my 40 Fearless Predictions post, the days of a World Series pick being absurd is over.
And while everyone and their moose is picking the Cubs or Mets against the Red Sox or Angels or Yankees... I feel that a team filled with young talent taking a "Why not us?" attitude will be the ones who survive this season and October.
It might sound like I am sticking my neck out with my picks this year... but again, how is anything out of the question after seeing the American League Champion Tampa Bay Rays.
SULLY BASEBALL'S OFFICIAL PICKS FOR THE YEAR

AL EAST: NEW YORK YANKEES
They are designed to beat up inferior teams in the regular season. However their lack of depth is startling. $200 million payroll and they don't have a jack of all trades infielder? That being said, they'll win 94 games.

AL CENTRAL: MINNESOTA TWINS
The White Sox are in transition, the Royals are a year away, the Indians have too many pitching question marks and the Tigers are a catastrophe. Meanwhile the Twins can pitch, hit, field and have some pop. This shouldn't be a close race.

AL WEST: OAKLAND A'S
Billy Beane knew when to fold 'em and dealt away Danny Haren, Rich Harden and Joe Blanton. Now the team is loaded with young arms and have injected (sorry) Giambi into the lineup with Holiday and Cabrera. Plus I think the Angels are going to take 2 steps back this year. This division is ripe for the taking by a less than perfect yet hungry team.

AL WILD CARD: BOSTON RED SOX
The Rays have talent, the Angels have experience and the Indians and White Sox will play hard. But the Red Sox pitching staff will be the difference.

Sorry Mets... bringing in a closer with a penchant for blowing the big games isn't the answer. Plus Philly will have a little swagger and way too much young talent for the Mets to beat them. And did someone mention the Marlins?

Dynamic young sluggers... a surprisingly deep pitching staff... a fan base revived... it will be a fun year along the Ohio River. Meanwhile Cub fans will see a team that looks better on paper not gel and will end the season talking about year 102.

Manny all year long will bring the fans in. Young arms like Broxton, Billingsley and Kershaw will win the games. And despite the best efforts of the Diamondbacks and Giants, the Dodgers finish in first with 96 wins.

How does Tony LaRussa do it? He has another Cut and Paste rotation and is banking on young Colby Rasmus and won't have Troy Glaus... and yet still pushes St. Louis to 90 wins past the Mets, Marlins, Diamondbacks and Cubs.

REDS defeat PHILLIES
3 games to 2
The Dodgers hold up their end of the bargain of providing star power to the LCS. More people start criticizing the Red Sox for dealing Manny.
The Phillies take an early lead but the playoffs turn into a Joey Votto/Jay Bruce coming out party.

AMERICAN LEAGUE CHAMPIONSHIP SERIES
A'S defeat TWINS
4 games to 3
Nobody watches the game played in the two ugliest parks in the game... and it is a shame as some of the best young talent in the game squares off. The A's pitching staff is the difference in a 7 game thriller.

Fox Execs pull their hair out as they have yet another World Series matchup without a national following. Yet even they have to admit the Reds are exciting.
WORLD SERIES

A'S defeat REDS
4 games to 3
Baseball has to party like it is 1972 or 1990. The Reds get big hits and Johnny Cueto and company look devastating. But in the end, the A's bats explode and clinch the big one. And Fox, forced to promote a series based on young exciting talent and hungry fan bases, will get a 7 game thriller that casual baseball fans will miss but loyal fans will cherish.
Billy Beane gets his World Series title as does Jason Giambi and Nomar Garciaparra.
Then in the off season, despite having a post season with low revenue teams triumphing, the Yankees will sign a big free agent and everyone will start screaming for a salary cap to keep the Yankees from winning every year!
SO THAT'S MY PICKS!
Again, I'm usually wrong... I hope I am because I want the Red Sox to win it all!
But if I am right, good times will be there for Reds and A's fans.
It will be just like the year that The Godfather came out... or the year that The Godfather Part III came out... take your pick! 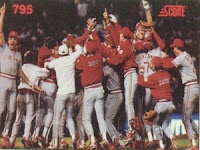