Only idiots are against instant replay in baseball 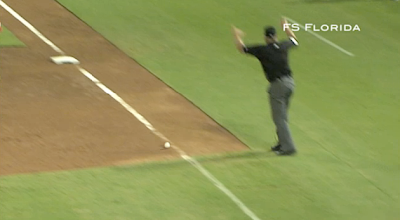 Yup.
It has come to this.

I've written about Instant Replay several times and it isn't worth rehashing EVERYTHING. But tonight's travesty just got me fired up again.
The Marlins won the game tonight beating the Phillies in the 9th.
Except they didn't because of a blown call reversed a walk off hit.
It's kind of like how the Giants won a game a few weeks ago... except that they didn't because of the blown call on the final play.
In a year with so many tight races in the National League, a game could be all that keeps the Giants out of the playoffs.
Or maybe the Phillies sneak in by a game.
Exactly what is it going to take for the anti Instant Replay dolts to come around?
We've had a perfect game taken away from a pitcher.
We've had blown calls left and right in the 2009 post season.
Will it take a walk off hit in the post season being taken away?
Seriously, opponents of Instant Replay, what would have happened if tonight's grotesque call by Bob Davidson had taken place in the Division Series... or the NLCS... or the World Series? 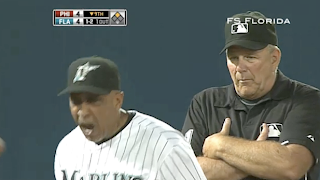 Is that what it will take to get some sort of replay system in place?
And as always the whole "it will slow down the pace of the game" argument is not only nonsense and asinine, but is untrue.
The replay showed that Davidson's call was dead wrong while Marlins manager Edwin Rodriguez was still on the field arguing.
So time WAS wasted on the call... and it was truly wasted because nothing was done or could be done.
Davidson can only arrogantly shake his head no, dead certain that he got the call right... only to have every single replay showing over and over again that Davidson's confidence is unfounded.
Once again, the rest of the planet has access to the undeniable truth that the call was blown except the one person who could use the information to... and please brace yourself for this outlandish idea... GET THE CALL RIGHT!
I am DYING to hear a valid argument against instant replay.
I am guessing I'm not going to hear them.